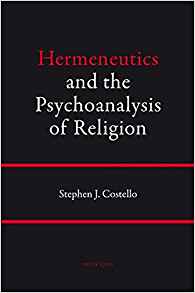 Hermeneutics and the Psychoanalysis of Religion

This book is a philosophical study of the Freudian psychoanalysis of religion from a hermeneutical perspective. Drawing on the work of Paul Ricoeur, the twentieth-century French phenomenologist, the author offers a sustained and rigorous reflection on Freud’s critique of Christian religion and raises the pertinent question of whether psychoanalysis should be conceived of as a form of hermeneutics. To this end, the author details the often acrimonious debates and discussions that took place between Ricoeur and Jacques Lacan, as well as drawing on the work of Slavoj Zizek on this intriguing subject, with Lacan and Zizek resisting any attempt to interpret psychoanalysis along the lines of hermeneutics. Having brought Ricoeur’s reflections to bear on both Freud and Lacan, the author next engages with the Thomist metaphysical tradition. He deals especially with Aquinas’ famous five arguments for the existence of God, the relevance of which becomes apparent in the last chapter when the author sheds a Lacanian light on Thomas’ mystical experience. The author argues that the `real’ God – the God of Thomas’ experience – pertains to the (Lacanian) order of the Real. The book concludes with a precis on the beauty of belief.